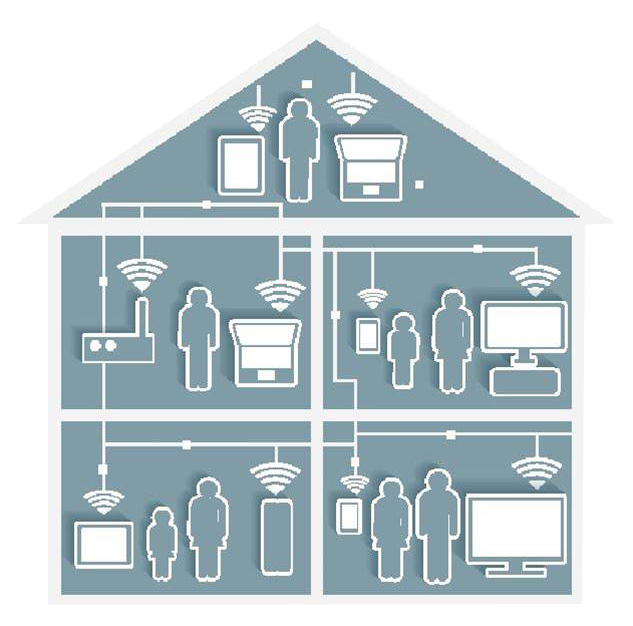 Lachlan S sends in a question which is “How do I extend my Wi-Fi network to the back of the house when my router is at the front, so that I can seamlessly move around without the signal still dropping out and reconnecting all the time?”. It’s a great question, and one that I hear almost every day.

Traditionally, many people go to a retail outlet and purchase a Wi-Fi range extender, sometimes known as a repeater, and this device essentially copies your existing Wi-Fi network name (called an SSID), and simply adds an extension such as “-EXT” to it. An example would be if your main Wi-Fi network is called ‘HOME-WIFI’ then the extender would simply take that and add a separate network called ‘HOME-WIFI-EXT’. Of course, as most Wi-Fi routers these days are at least dual-band (sporting both a 2.4GHz band and a 5GHz band), it’s not quite as simple as this example, as the extender needs to copy each individual band and add an “-EXT” to it, so you end up with something like HOME-WIFI-2.4GHZ-EXT and HOME-WIFI-5GHZ-EXT on top of your existing Wi-Fi network names. Suddenly we have four distinct networks (or six if you want to extend a tri-band router), all competing for Wi-Fi bandwidth and actually causing even more congestion on your home network, let alone the congestion from other networks around you, such as your neighbours.

But you go ahead and set up your extender, and you can now see these new networks around your home giving you better coverage, albeit with four or more Wi-Fi network names, however now the big problem is that your mobile phone, tablet or Wi-Fi device, as they move about the home each tries to ‘hold on’ (sometimes for dear life!) to your Wi-Fi network that it’s connected to, even when there is an Extender right next to it giving far better signal strength and performance. Devices such as mobiles or tablets aren’t designed to switch back and forth between Wi-Fi networks all the time, they are designed to lock onto one network and try to maintain this connection, until it disconnects or drops out, and then the mobile will scan its surroundings again and only THEN it is happy to connect to a stronger Wi-Fi signal. All in all, you end up with sub-par Wi-Fi performance.

Enter Mesh networking or what we at D-Link call “Whole Home Wi-Fi.”

Even though the term mesh or seamless Wi-Fi has only started to be used more recently in consumer circles, the underlying technology is nothing new. I’m sure if you work for a larger business you find that you can wander around the building or the campus and never have wireless drop outs on your phone, tablet or PC. This is because larger businesses use a device or devices called wireless controllers, sometimes on site, sometimes hosted in the Cloud, and these devices effectively ‘manage’ the entire Wi-Fi network, including channel overlap, multiple Wi-Fi networks such as your Corporate Wi-Fi vs. Guest Wi-Fi, and a bunch of other goodies to provide seamless roaming for users across the business.

However, due to the proliferation of Wi-Fi enabled devices now entering the home and smaller businesses, networking companies are now taking these ‘smarts’ that once belonged only in the realm of big business, and are using the key features from business-grade wireless controllers and embedding them into your shiny home router. Of course, a home is generally full of fabulous things like microwave ovens, fridges and metal door frames, all of which are not all conducive to wireless signals getting through them, and this often means that an extra device (or two) is sometimes still needed to physically ‘repeat’ or ‘extend’ the wireless signal to cover all the areas of the home. Think of a long terrace or a larger multi-story home, which is where we see this technology being the most useful.

Because these additional extenders are now effectively ‘managed’ by the main router itself (assuming you purchase one with these ‘business smarts’ embedded in), you no longer see different “-EXT” Wi-Fi networks, but rather a homogenous, single Wi-Fi network, that covers or blankets your whole home with fast, powerful Wi-Fi. Thus, what we call “Whole Home Wi-Fi!”

So, Lachlan, for your case, I’d recommend going to a reputable retailer or online store and finding a set of products that support mesh or Whole Home Wi-Fi technology. There are limited options available, in particular when you need a modem router that supports NBN out of the box, and that you can mix and match extenders to give you the best possible Whole Home Wi-Fi experience. For further information, feel free to check out http://www.dlink.com.au/wholehomewifi. I look forward to receiving more questions from readers for the next edition. Until then, safe browsing.

Simply choose a support option from the icons below:

support Email Phone Register A Product Check your Warranty
D-Link is the global provider of network technology solutions for consumers and businesses to connect with information, resources and each other. D-Link defines technology innovation by designing award-winning, high performance and first-to-market products to suit every budget.